This first part of the way, (or the last, for those who starts from Brindisi) is certainly the richest in romain vestiges, with many monuments, expecially, along the part of the road inside Rome. It’s a straight road 22,5 km long, lightly sloped (355 meters the altitude difference) up to the city of Albano Laziale.

Elevation profileThe list of monuments laid on this part ( up to Frattocchie)  is so long that’s easier collecting the rich documentation available inside the  Info Point of Regional Appia Antica Park, (700 m. away  from Porta San Sebastiano) or get it on web site (https://www.parcoappiaantica.it). You may also find the guide “In Cammino sulla via Appia nel Lazio” printed by Regione Lazio, or you may read the detailed informations reported by Riccardo Carnovalini at the end of the book “APPIA” written by Paolo Rumiz. If you  want to retrace the whole Appia Antica Way, we subjest to read this book, from which this project started; it will be you partner, along the way. 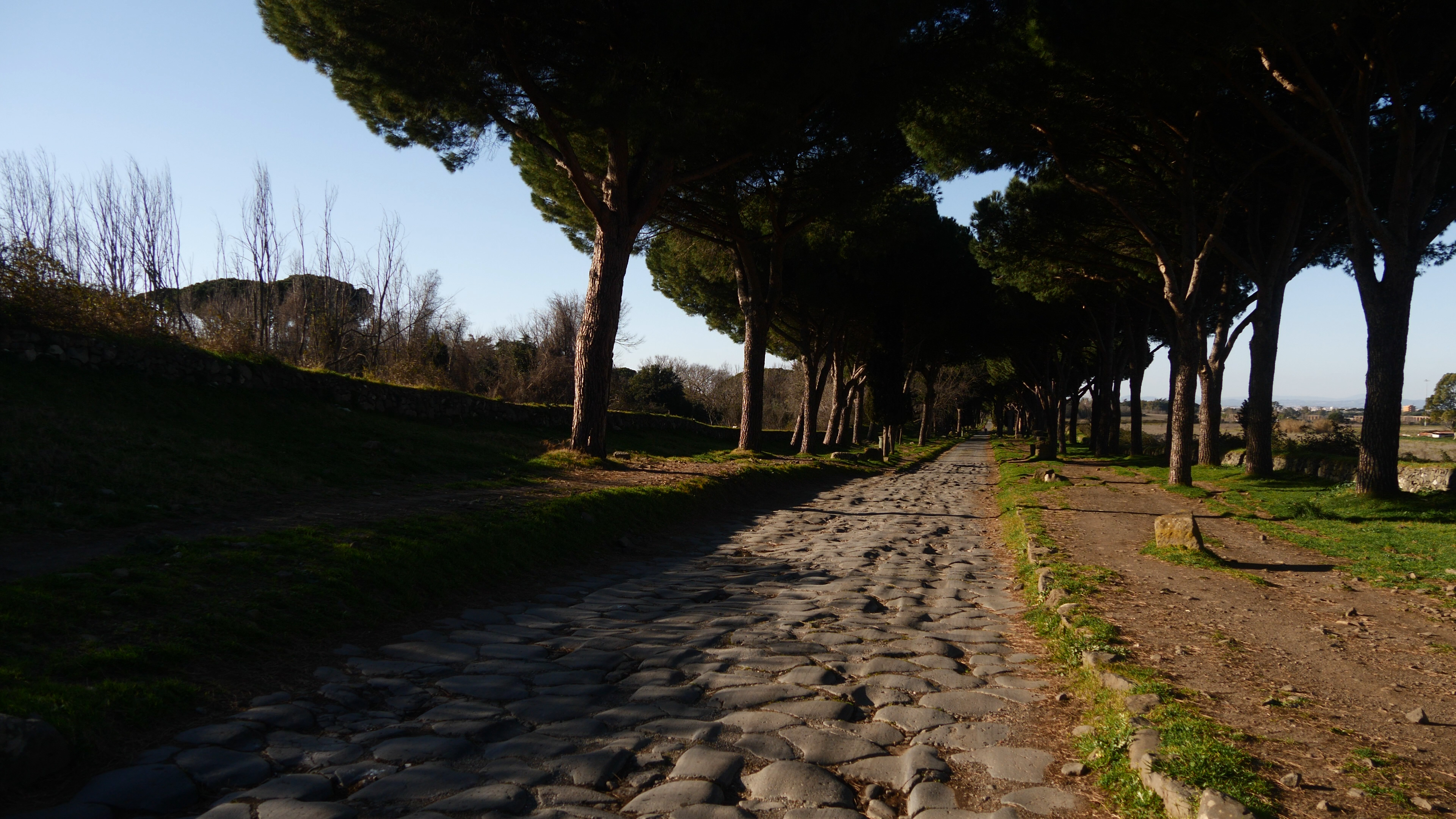 (picture of Alessandro Scillitani)Here we want to tell you the critial points that need to be approached with caution. The first monumental part is secure: car traffic is restricted to residentials and, expecially on week-end, you will meet only a lot of walkers and cyclists.

The way starts from Porta San Sebastiano, easily reachable by pubblic service.  A narrow sidewalk (250 m long) up to the via Cilicia subway; from there you must pay attention to car traffic: no sidewalk or footpath! Then you arrive at on old paper mill, now headquarters of Appia Antica Park. After the church named Domine Quo Vadis (take left) the same track is still used by pedestrian  and cars: pay attention: narrow lane between walls. 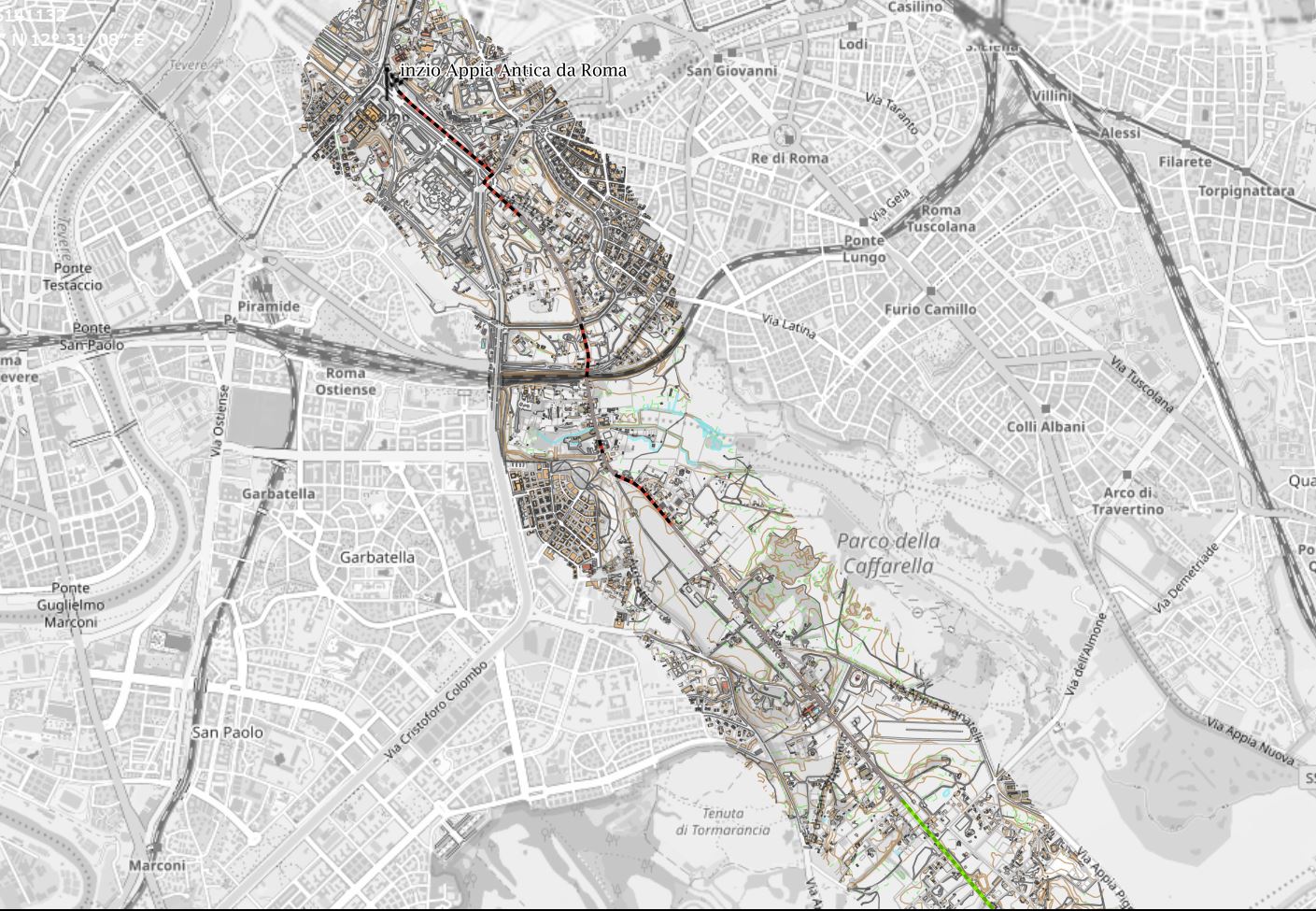 This first part of the way

Going over San Callisto Catacombs, the way becomes easier to walk and you will enjoy wonderfull. Ancient monuments and unique landscape. You walk next to Mausoleum of Cecilia Metella and you will find some original part of “basolato”, typical large stone pavement used by romains to build their famous roads. 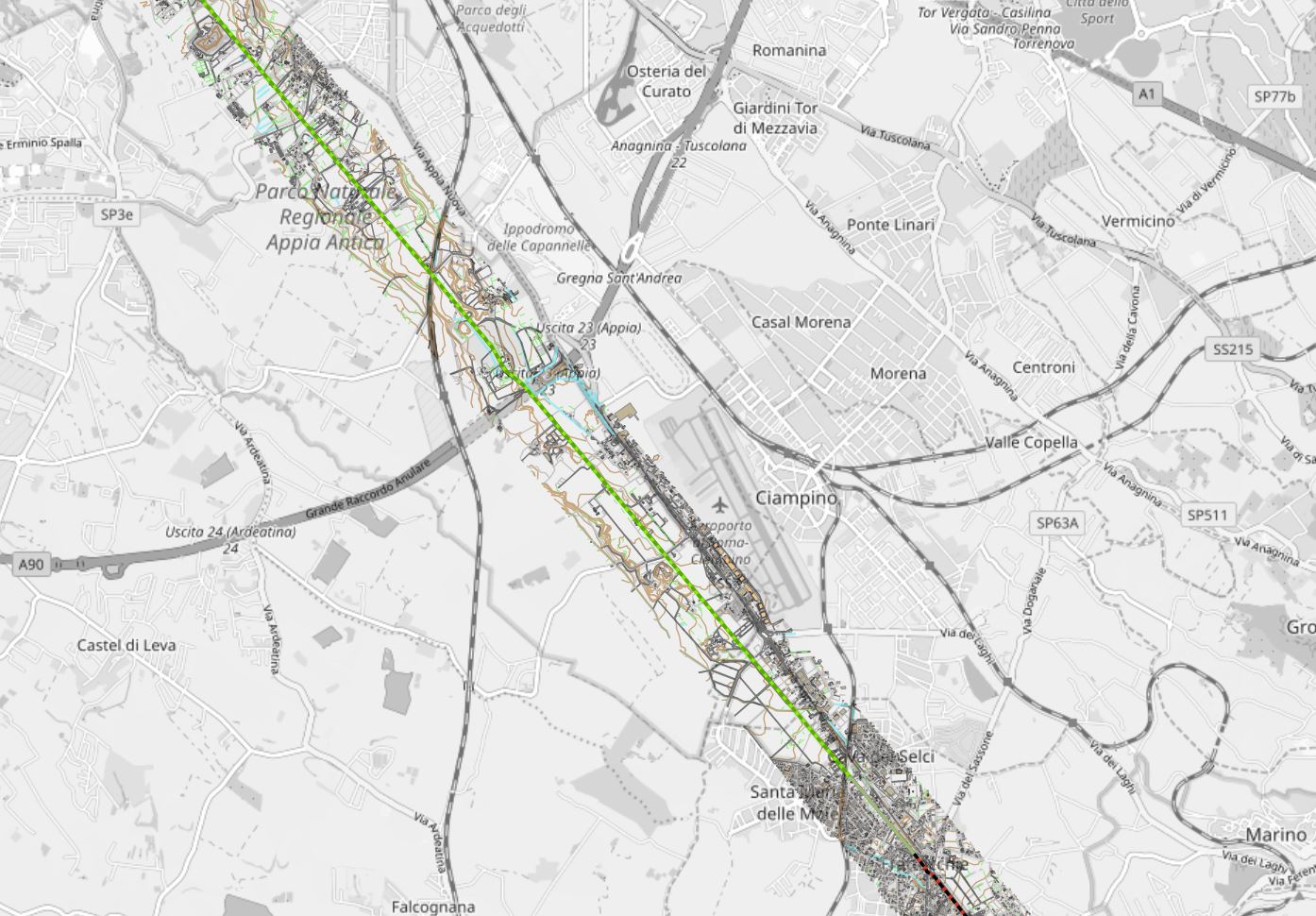 This second part of the way

The walking continues through a beatyfull surround up to the Tor Carbone cross, where you have to pay attention, again, to cars. Around, pubblic drinking water. 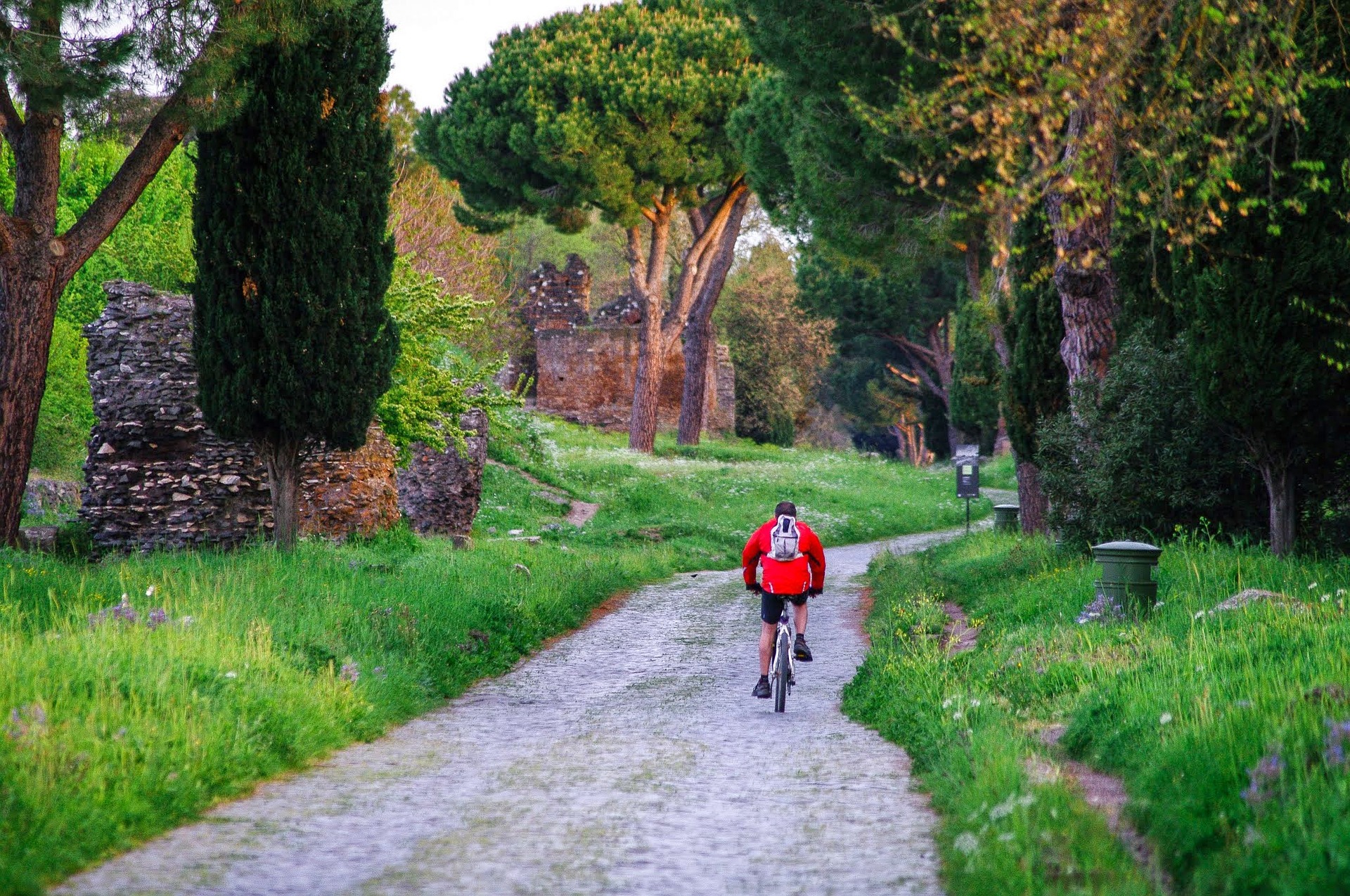 With the exception of another crossroad used by cars, the way  continues safetly, going over the Ring Road (Grande Raccordo Anulare), that here run in tunnel, just realized to preserve the Ancient road. Next cross is Via Fioranello: you are near Ciampino Airport, the second one of Rome, that is only 750 metres far from. You have walked half of this first stage.

Later, you will continuing up to Santa Maria delle Mole, where you will find a railways station and many refreshment points. 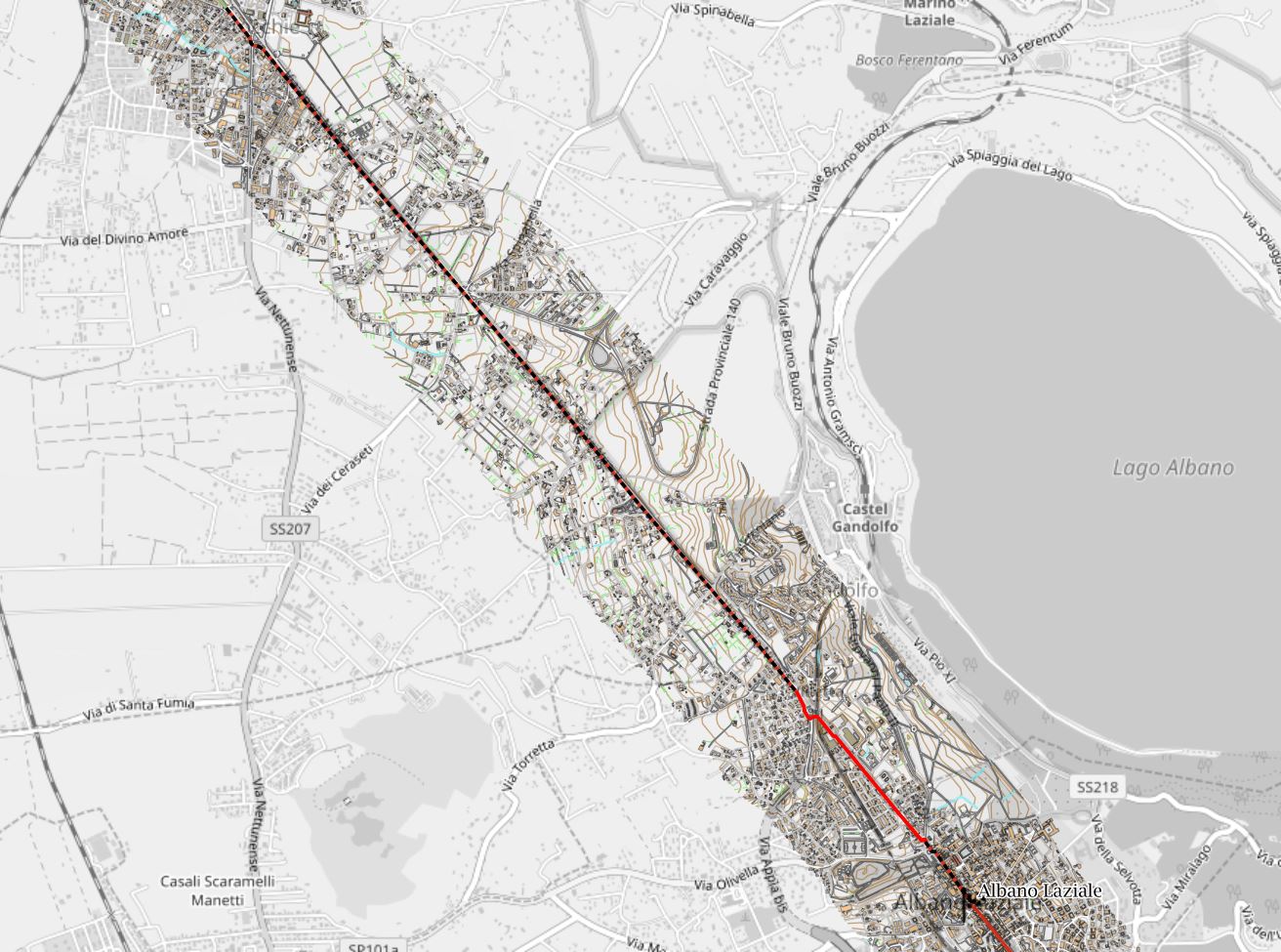 This third part of the way

Leaving Santa Maria delle Mole, you have to cross the road (attention, no sign!) and follow a path not easy to see because of full of bushes (and is better if you wear long pants!) up to a place named Frattocchie, 15.2 km from the star point. A very large and busy crossroad joins Appia Antica with highway Appia. Here, a couple of drinking water pubblic fountains, refreshment poits, and also a Fast Food, whose basement is an original ancient road, you may watch trough the glass pavement.

From this crossroad the way is going toward Albano, and you may walk on the narrow sidewalk on the right of the highway, paying attention. You are still along Appia Antica: the modern road runs exactly over the old one.

Not far from Albano Laziale, before a tunnel, you will find a roundabout (Piazza del Fragolino). Pay attention! You have to cross, but is not a secure place: no pedestrian crossing, no traffic lights, and, also, is not easy to see around cars arriving. Pay attention, again: only 900 metres to reach Piazza Mazzini in Albano Laziale – first stop point – but no sidewalk or footpath . At last you may rest in Albano Laziale, a city of Castelli Romani, known in the ancient age as the base of the second partica legion (Castra Albana)

If you wish to see this whole first step of Appia Antica Way, here a bird’s eye video: