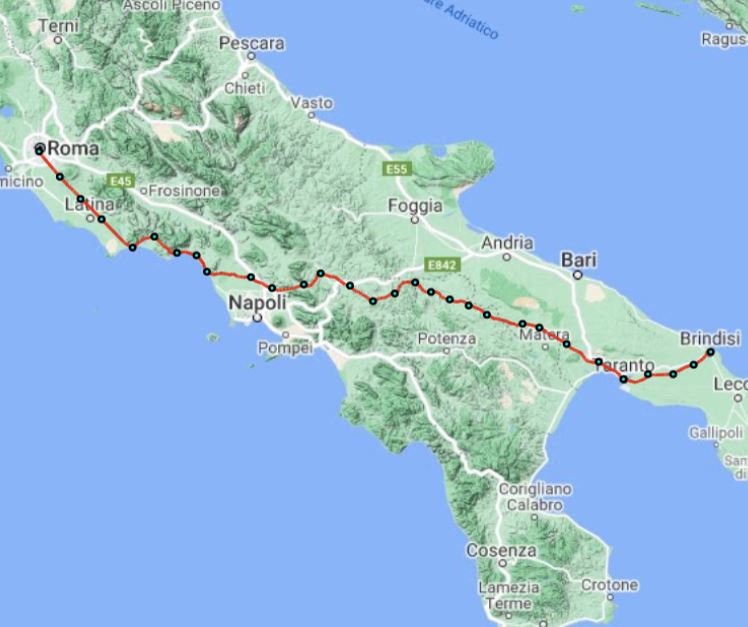 Just with the new year, the executive design of the Way starts. The group of professionals composed of RTP SAB srl, DODI MOSS srl and Studio Costa Architecture srl, winner of the tender called by Italian  Ministry for the design of the Way, has started the work. END_OF_DOCUMENT_TOKEN_TO_BE_REPLACED

The Regina Viarum, among all ancient roads, is the richest in memories and testimonies. Also deﬁned by the Latin authors as insignis nobilis, celeberrima, it soon became in fact the unsurpassed model of the road system that from Rome lead to the furthest regions ofthe world known at that time. The Appian Way was in fact the first arterial of а complex and articulate road system, which is still the base of the modern road network, and instrument of great communication.

The Appian is probably the most visionary among the great ancient enterprises, which shaped the Italian landscape.  Planned in order to connect Rome to the ancient Capua, (Saint Maria Capua Vetere) in the midst of the second Sanmite war, had since the beginning a great political meaning. It had to respond, in fact, to the need of Rome to progressively expand its power into the Southern regions and lay the foundation for the Empire.

The gradual extension ofthe Appian road signed the increasing subjugation of the territory: after the deduction of the colony in Venusia in 291 b.C. the Conquest of Taranto and Sannio in 272 and the foundation in 268 b.C of the Latin colony of Beneventitun, started the road extension to Taranto with the aim of the reaching  Brundisium, bridgehead towards the Est, where in fact the colony was deducted between 246 and 243 B.C. in the visionary intent of expansion beyond the Mediterranean.