A 30-kilometers long stage that connect two italian regions: Basilicata and Puglia. From the Masseria (Farm) Tripputi you take Provincial Road 79 in south-east direction. Few cars on this road and grassy edges help you to avoid if vehicles come in.

Fields on both sides of the walk, as far as you can see. Two kilometers from the start there is a dirt road on your right; you can walk on it:  it’s always parallel to the provincial to which converts 1.7 kilometers ahead. To the right,on a hill, you can see the Castle of Monteserico. The walk continues on SP 79 road. On summer, it is better to bring with you an umbrella as a sunshade, because here the trees are very rare. When you arrive at the junction with Provincial Road 106 leading to Irsina Scalo you are 6.4 kilometers from the start. Not far from the juction, on your left, there is a fountain.

You always continue on SP 79 which looks a bit battered and often overrun by the earth: but for walkers this is definitely not a problem. Further on, you reach a junction with the 655 Bradanica State Road. Be very careful here, because the road, for about 500 meters, has guardrails and no sidewalk. Continue on the SP 79, rough, often overrun by the land but quiet, underpassing main statal road. On the left appears the artificial lake of Serra del Corvo, border between Basilicata and Puglia regions. After crossing a bridge on a ditch, you take a dirt road to the left (10.3 kilometers from the start) that crosses a grove, skirts the lake and then climbs up on SP 79, just before the waterline straight of the dam (12.2 kilometers from the start): you entered in Puglia, and the road change name, becoming Provincial Road 26 – Lamacolma (closed to cars).

On the long climb, next to aservice road  house, no longer inhabited, there is a fountain and 750 meters later, on a swing of the road, on you right, you take the dirt road named Contrada San Felice that, just a little further forward, becomes paved, crosses a large park of wind blades; always quiet with low traffic. At 21.9 kilometers from the start, on a 90-degree swing of the road Contrada San Felice you take on the right the road named Contrada Santa Teresa; cross the village and you arrive at the  State Road 96: cross it and go on the Provincial Road 193, on the aother side.

With an overpass you go over State Road 96 bis (24.5 kilomerri from the start) and, after 200 meters you take to the left a dirt road that runs parallel. You take to the left, passing on a bridge the Pennecchia stream, and reach the road named Contrada Pendino – Alvitino, going on until you pass under the SS 96 bis. From here you go alongside the railway for a short stretch and, through dirt roads, you reach a tunnel under the intersection that connects the SS 96 to the SS 96 bis and you arrive on a road that skirts a long tuff brick wall. After crossing the La Gravina stream with a bridge, you reach Via Alcide De Gasperi and cross it. You are near Botromagno Archaeological Park. You take a path that runs along the cemetery wall (on yur right). At the end of the cemetery wall you take on your left Via San Vito Vecchio. You going inside the town of Gravina di Puglia (sidewalk) reaching Giuseppe Pellicciari Square, final point of the stage. 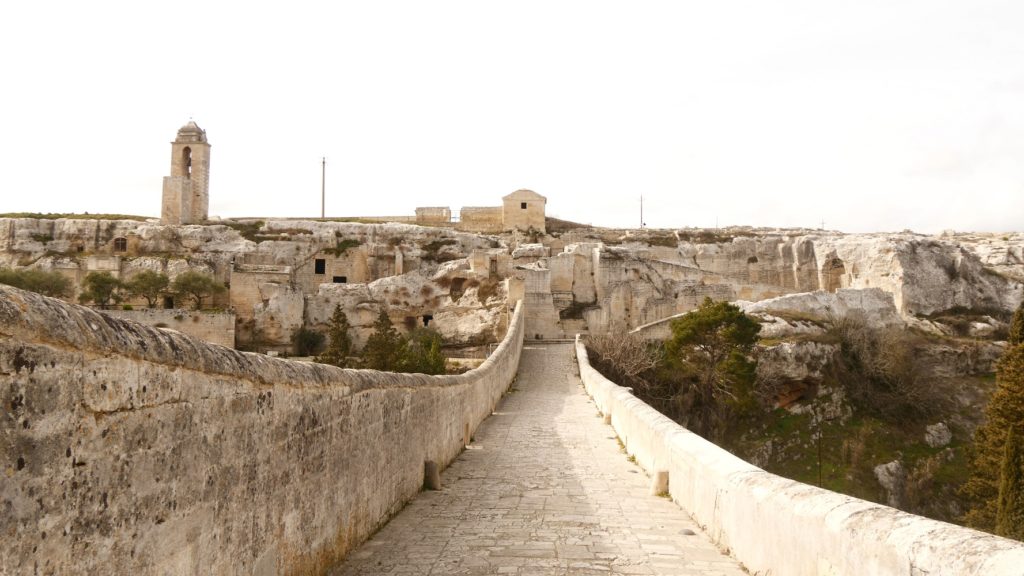 For a sighseen of this stage, watch this video: