The idea to have a trip along the whole Appia Antica began to take shape in 2017, when we knew that MiBACT, in setting up the Appia Antica Archaeological Park, entrusted its Director with the responsibility for the project of enhancing the entire consular road, up to Brindisi. It sounded good to imagine a route with a slow pace, a journey through nature, history and culture of local people.

After reading Paolo Rumiz’s book, the idea became true. We started from his great work and tried to enrich it driven by the desire of making a new, different and constructive contribution. The result was a memorable bike trip of 13 stages of about 50 km per day. 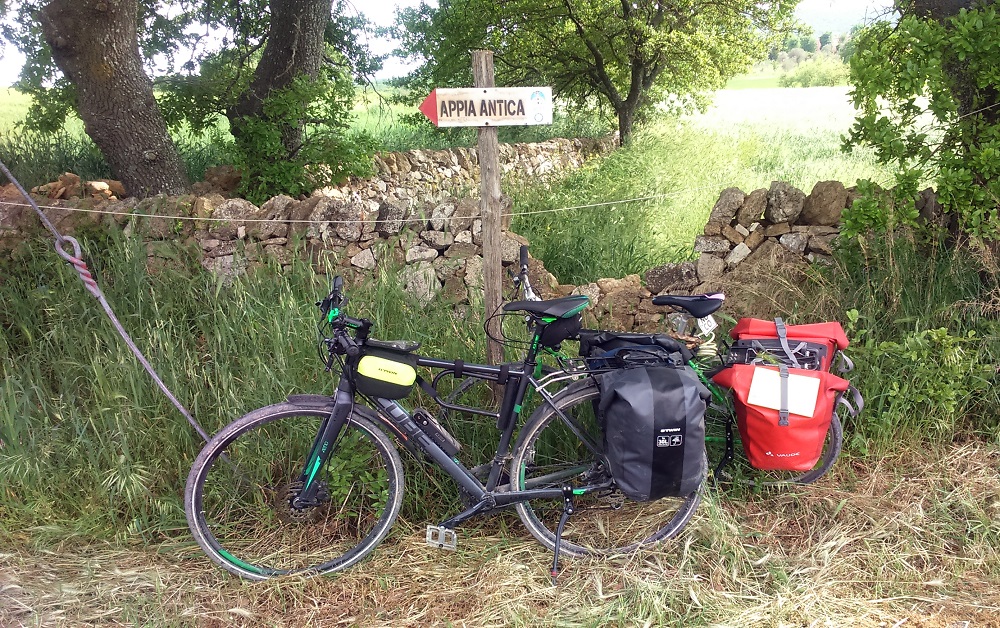 The fundamentals of our project were: 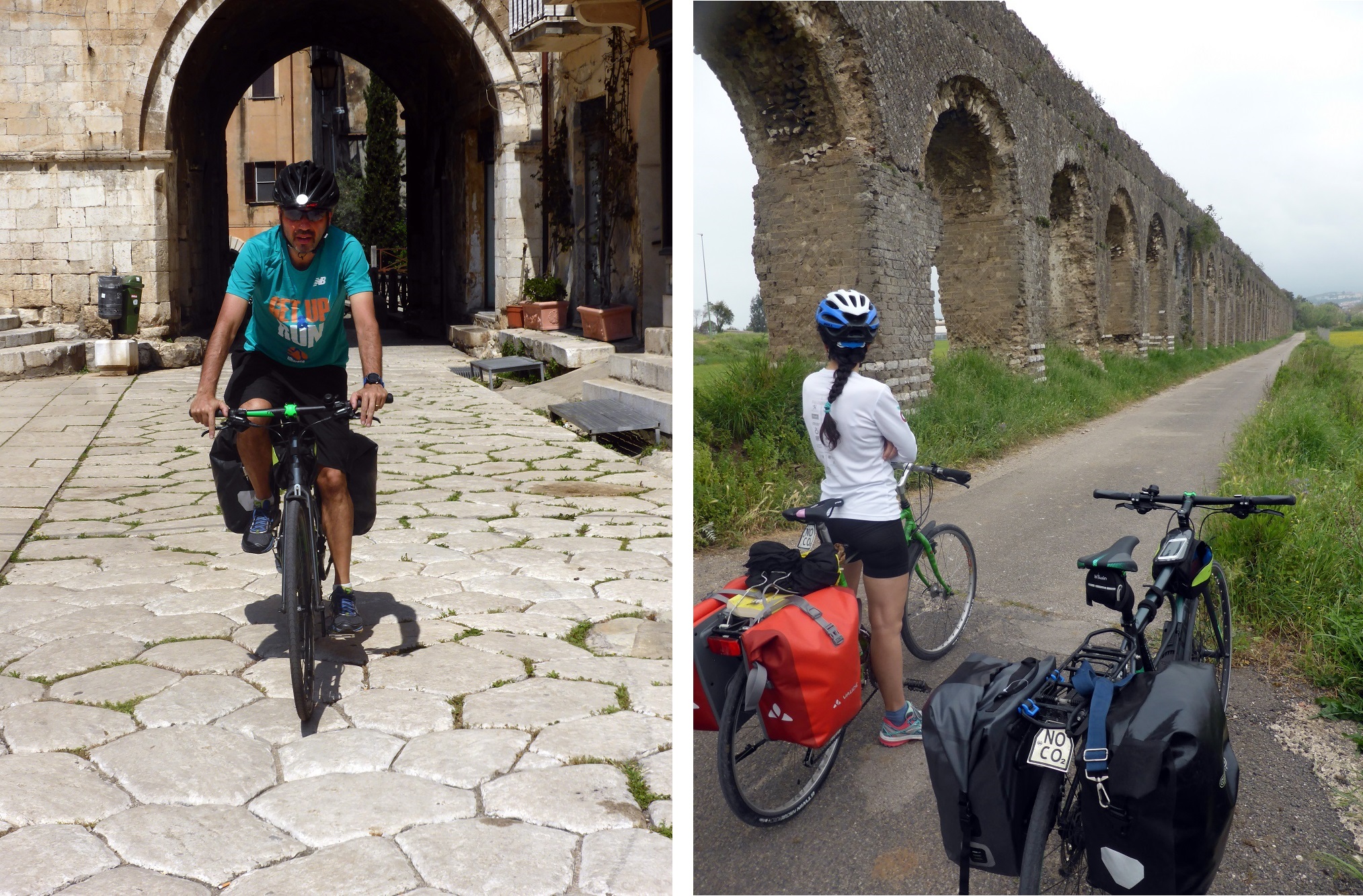 In order to meet the above fundamentals, the short duration of each stage was essential. It was needed to prevent the hurry to prevail and distract us from experiencing and enjoying the present moment completely.

We left on the 2770th Rome Birthday ab urbe condita* (just to feel even more Roman than we are), and little by little we founded many traces of the Appia Antica both along the way and in the memory of its inhabitants.

We met a great number of people passionate about their history and in love with their territory; we realized soon that in the heart of the local people the Park to Brindisi already existed!

The trip was allowed to use the logo of the Appia Antica Archaeological Park and it was included in the initiative “30 days of biking“, an event which takes place every year in April throughout Europe, with the aim of encouraging the daily use of bicycles.

The bike path is far from being certain and well-traced.

Cycling toward Melfi without track

In fact, it is traced by a visible and invisible line, which emerges and succumbs by passing over roads, mountains, rivers, cultivated fields and towns. This line must be sought, discovered and chosen, even when difficulties seem to force you to make a detour: from high speed roads to unpaved paths, from roman paved roads to wheat fields, fords, fences…

We invited the most varied association in the sector. Our invitation was declined with fear by all the passionate cyclists contacted, giving us the measure of our being pioneers: we were leaving along a route so uncertain that we could not even guarantee to ourselves to arrive every night at the exact destination planned. 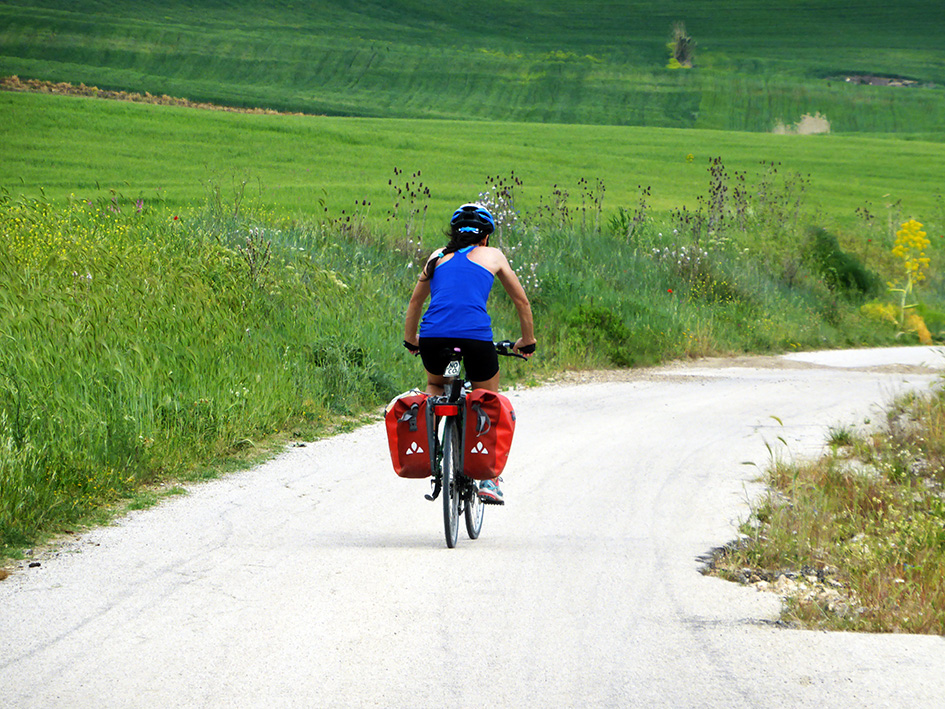 Driven by this awareness we documented everything we considered useful to anyone who wanted to repeat our journey; the material, a little revised and corrected after the experience, is here. It is the first contribution we are pleased to make in terms of defining a route that will lead Italians (and not only) to rediscover the bicycle, the Appia Antica and Southern Italy, with everything that such an operation may imply.

On one hand, we consider it important and necessary to increase the culture of cycling, too often seen by Administrations as a game or a Sunday diversion, rather than a serious, clean and alternative mean of locomotion.

On the other hand, we like to believe and consider ourselves available to anyone (associations, private citizens, administrations…), making our experience useful not only to Southern Italy, that is struggling to make itself known, but also to  those who want to discover it with the pleasure of balance and respect, travelling along the Queen of All Streets.