At the beginning we thought we would get away with just a ﬁeld trip, none of us would have ever thought ofa journey that would have reached the status of a discovery. The walk, in the memorable spring of 2015, surprised us by stating the contrary. We were not only walking the Ancient Appian road, we were ﬁnding it again. Too many were the signs erased the passing oftime and for much too long no one had fully taken that wonderful red thread. We were in front of the memory loss of the Nation towards such a glorious trace. We couldn’t believe that Italy forgot that line — the first road in Europe – and make an icon out of it, like Spain did with the Way of Saint James.

Crossing the Agro Pontino, the slopes of the Aurunci mountains and the boundless extension of the Tavoliere, we felt that the road, this great national treasure shockingly abandoned — took over us, demanding a work of restitution to ltaly that couldn’t end with the walk, but had to continue in different ways involving not only the govemment, but the local population itself interested by the route.

It was not only about signalling the itinerary and making it accessible on foot or by bike, but about reactivating a relationship between the Country and this noble creation. Because the dust of time and oblivion did not only bury the Queen of roads, but tampered with, often deliberately, by Italic looters of the territory. ln too many points the sublime beauty of the landscape was covered with layers of asphalt, parking lots, highways, supermarkets, quarries, steel plants or barred by gates, disguised by different names, ridiculed by bad building amnesties or literally stroked by pickaxe Isis style in Palmyra. We had to ask the Italians to take responsibility and charge in view of a big relaunch operation. 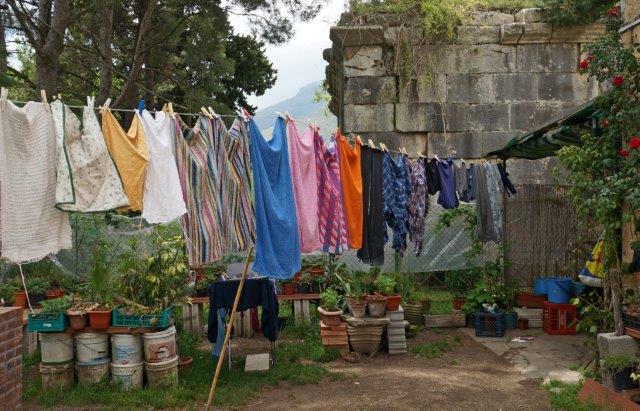 We had not yet arrived at the terminal in Brindisi and it was already clear to us that the story did not end there, in fact the real work was just beginning. Back from our trip we were already at the Ministry of Cultural Heritage to deliver the itinerary as we had it laid out on our GPS and to declare that we were ready to work towards the relaunch of the road. Within a month an article was out in “Repubblica” newspaper (tanks to which the trip was possible in the First place) a series of over 28 full pages devoted to the tale of rediscovery. Simultaneously three one hour DVD were developed and a number of audio visual pills, all put into circulation by the same newspaper.

In September we were doing the walk again, this time with a speciﬁc intent: to meet the local population singled out by our tale, gather new information and mostly a strong and popular support to our operation of rediscovery. And while the Ministry went to work, we started the production of a book called “Appia” able to offer to the Country the key to the lost way. But the addition to this great adventure lived through “our feet” could have only been a great documentary exhibition, almost miraculously with minimal means, which we were able to build in “Pareo della Musica” in Rome. Today the exhibition is touring the Country along the same itinerary of the walk, and it will also land abroad, becoming de facto a Europcan symbol.