Venosa rises on a hill between two valleys. It was founded in 291 .C. by the Romans as a Latin colony after the final defeat of the Samnites. Its Latin name was Venusia, by many attributed to Venus, goddess of love. Others attributed it to the goodness of its wines or the breezy climate. On 200 B.C., after the war against Hannibal, it was again inferred by sending new settlers. On 89 BC. Venosa received the title of Municipium and its inhabitants the right to vote. The location on the Appia gave to the city a great economic advantage. On 65 B.C, here Quintus Horace Flaccus was born there, one of the most illustrious Roman poets, then moved to Rome. On 43 B.C. Venusia it was again inferred and many lands were expropriated and assigned to war veterans. On imperial age, around 70 A.C. one of the first Jewish communities in Italy tool place  in Venosa, well integrated with the local population. On 114 A.C., due to  the construction of the Appia Traiana  – that from Benevento cut towards the Adriatic coast to reach Brindisi –  the city began its decadence, because on a less frequented road. 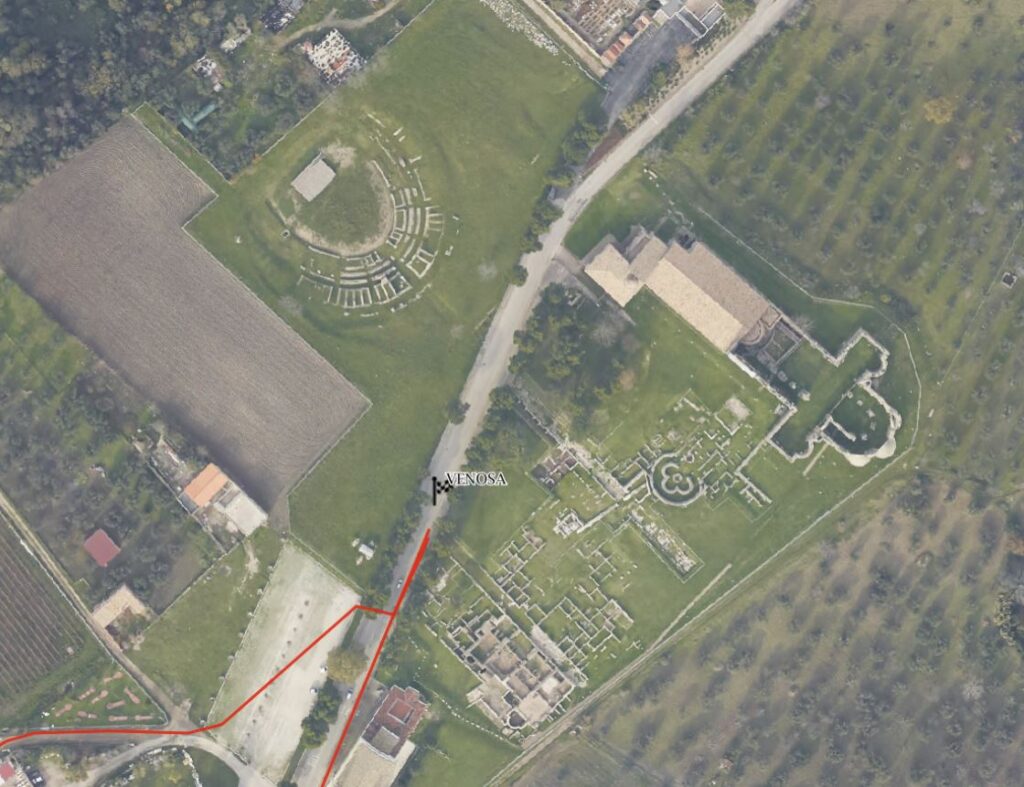 The city suffered a rapid decline due to barbarian invasions and was sacked several times. Its recovery took place in the 15th century and grew a lot also as a cultural place, although repeatedly affected by earthquakes. 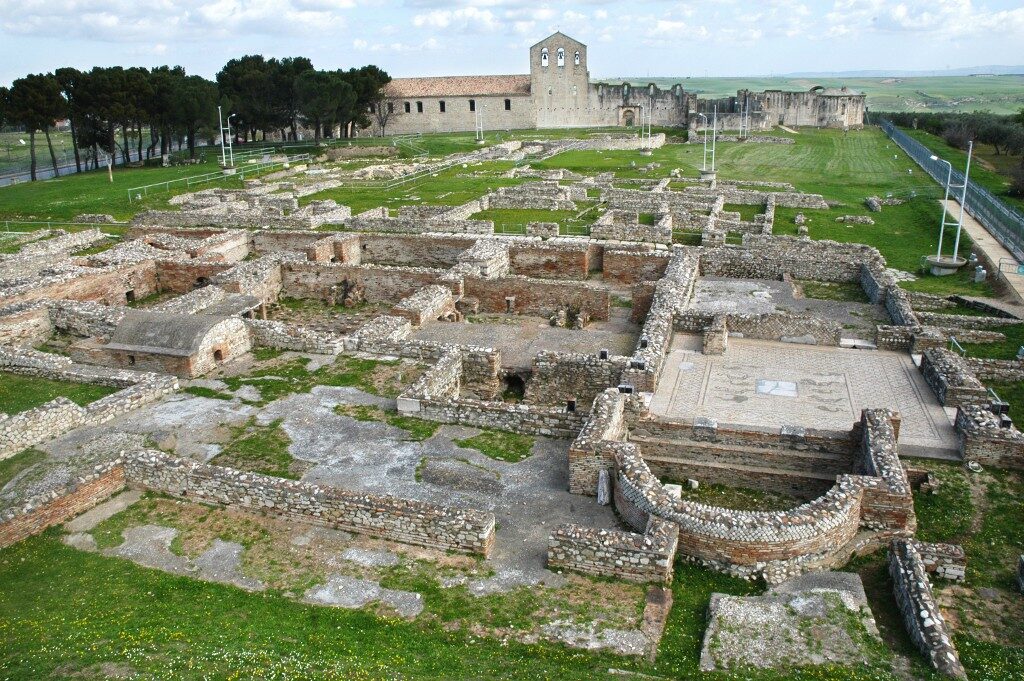 In the wide  archaeological park open to the public, is possible to find  structures from both roman and medieval times. In evidence the roman thermal complex, articulated in different spaces, such as the “frigidarium”, that shows, on the floor, a depicting marine animals mosaic, and the “calidarium”, the warm bath with small brick pillars. 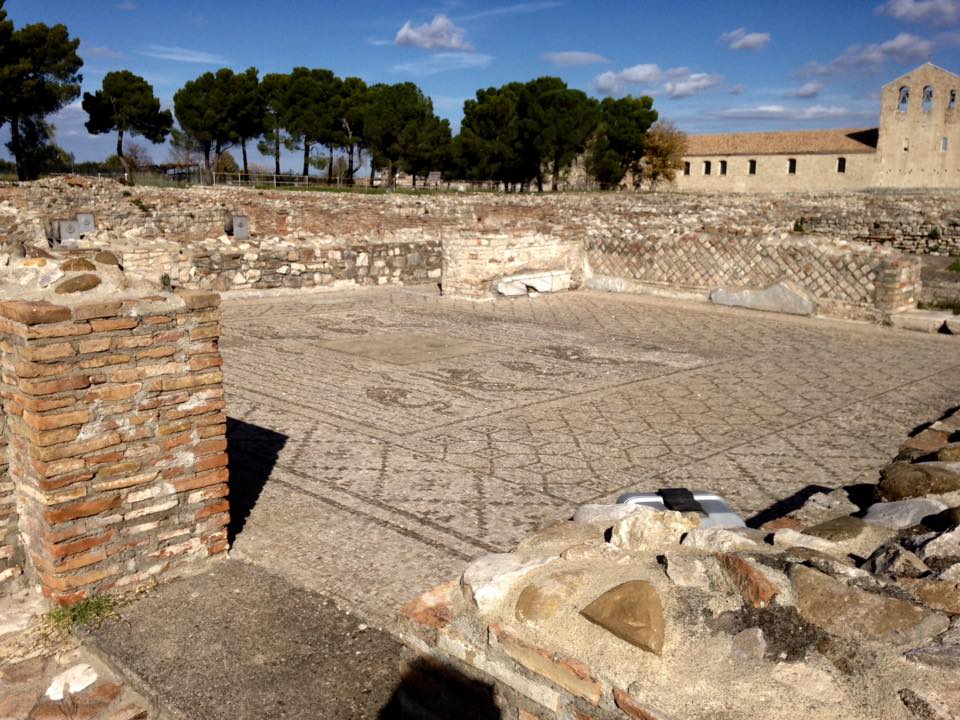 Another important construction  of the area is the amphitheater. Elliptically shaped and on three floors, it could accommodate about 10,000 spectators. Today you can see part of perimeter and the masonry walls. 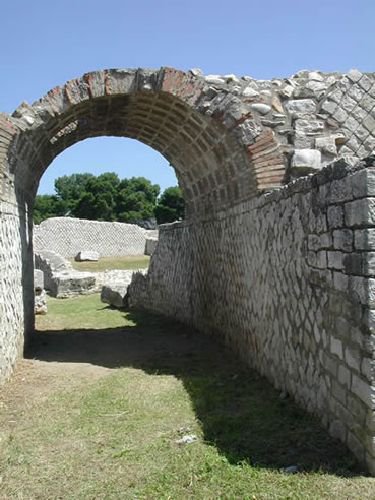 Roman also the so-called House of Horace, dating around  2nd. century BC, consisting of two adjacent rooms identified as rooms of a thermal complex, the first, semicircular, now set up with reconstructed furnishings from the Roman era, the second rectangular without roof.

the Jewish catacombs ,located on the hill of Magdalene, and dated imperial age. They are composed by a series of corridors along which you can admire Jewish burials and iconography. Next to these catacombs, there is another structure that houses the Christian ones.  The whole is a testimony to the peaceful coexistence between Jews and Christians. 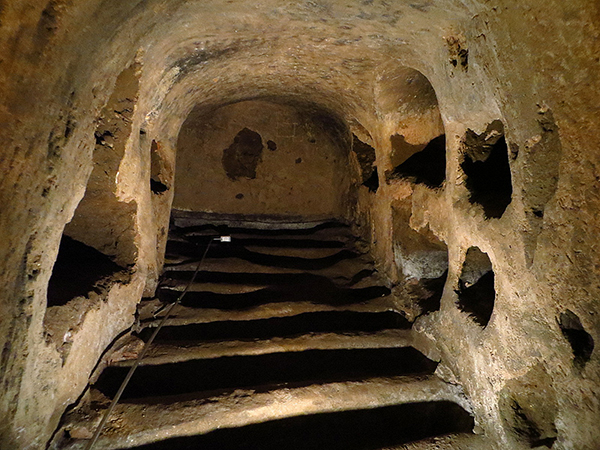 In addition to testimonies from the Roman era, in Venosa is possible to find many other buildings of artistic interest such as: the Complex of the Most Holy Trinity, known as the unfinished church, the Cathedral of St. Andrew, the Church of Purgatory and several other churches, the Aragonese Castle, the noble palaces and fountains. Not far from the village there is another archaeological area, Notarchirico, consisting of finds dating back to the Paleolithic era (between 600,000 and 300,000 years ago). Remains of large animals such as elephants, bison and rhinoceros are found, and human traces of the species Homo erectus; the site can be visited on request.

Venosa has been named one of the “Most Beautiful Villages in Italy” by the homonymous association.